It’s been a while so a good few posts to catch up on! Work took over the last 4 months of last year and so I’ll start with our summer holiday!

…a very much needed holiday.

Holidays are often described as a chance to put your feet up! Well, yes. I have an office job. My feet are up (or at least not holding me up) for a lot of the day. So that’s the last thing I (and perhaps many people) need on a holiday.

In light of that, and in my ongoing endeavour to ensure my 5 year old daughter gets plenty of movement, we went on a road-trip/hiking holiday! We needed to do something on the cheap, and were armed with a couple of invites from people I used to teach with in Central Europe. Anyone could do this kind of holiday cheaply by camping instead.


We started in Verona and took the train from there straight to the Dolomites. We stayed in a tiny valley called Sarntal, and used that as the base to do little hikes around the valley, and to take the bus into the closest city – Bozen/Bolzano. The bus ride is a pretty exhilarating 20 minute journey through the mountains!
I’m not saying it’s easy getting a city based 5 year old to suddenly take to hiking. And the weather got to us at times – we much prefer the Irish weather to be honest! Irish weather really lends itself to hiking as it’s mild year round. The hot weather was the main  thing my little girl found difficult. So, after allowing for that, we based our days either relaxing with friends (meals in the garden, visits to outdoor pool, going to little village fests) or hiking. It was a good balance. And worth it as the little girl loves being outdoors and is really chuffed with herself after the challenge of each hike! 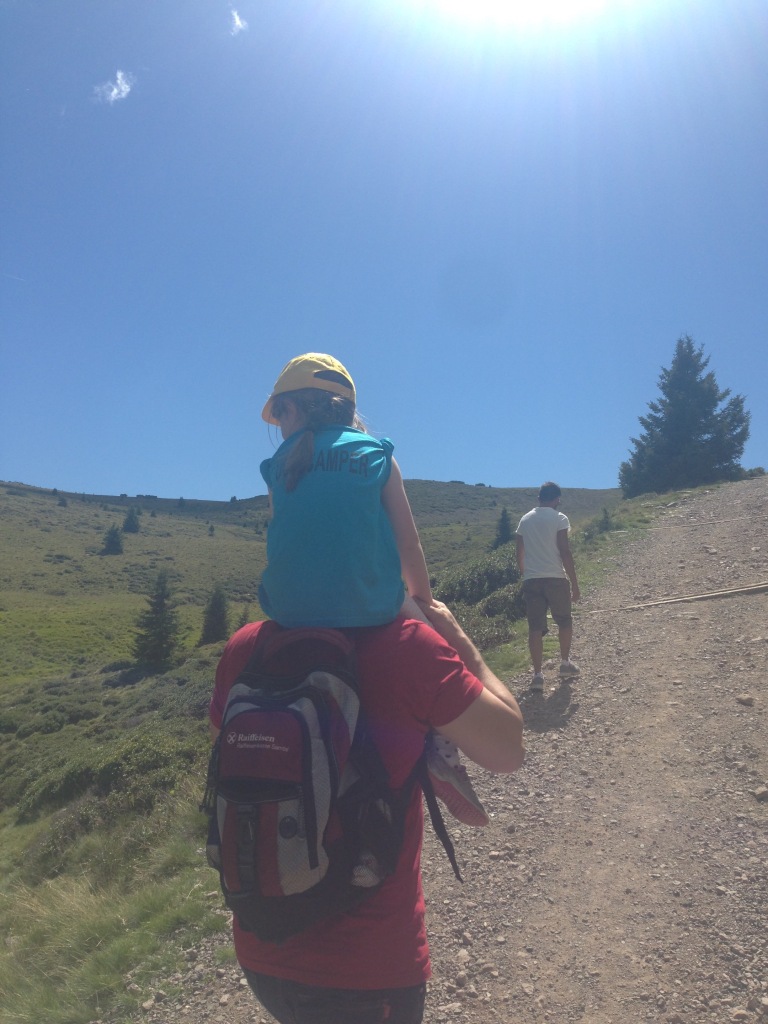 We hiked in a group at first, which was great as there were enough of us to help my daughter and carry her if she needed it. She got plenty of movement in between, and I was impressed a could carry her quite long distances if needed! We loved the views and saying hello to the Alpine cows on the way (they’re huge!).

Being in the mountains was great as the city was stifling – impossible to sleep or walk around. After catching up with some wonderful friends (see you again soon!) we said out goodbyes. On our final day in Italy we were very happy to get on the train over the Brenner pass and into cooler Austria…

I love Austria. You immediately get a more relaxed feeling when you pass over the border!


We stayed with a friend in stunning Innsbruck. With its fairytale Altstadt (old city) – all cobbled streets and picturesque buildings, elegant coffee houses, fun city parks and view of the Alps wherever you look, it’s one of my favourite places to be.

Straight off the train it was a great feeling to be on this ‘road trip’ – just my daughter, a rucksack and myself! We stopped in the station for groceries and then walked to the apartment. After lunch on the balcony a little part of me felt home.

We spent days wondering around the city, playing in the parks, catching up with friends and, of course, hiking!


We took the pretty damn impressive Hungerburgbahn up the Nordkette mountains and hiked to the Arzler Alm.  It’s an easy hike though we were slow due to the gear on that day. There are signposts on the trees to show you the way, and someone has built little fairy houses – delightful for the children to look at on the way!

We took a packed lunch to save money but I did treat us to one of their famous cakes at the top! We spent ages up there. There’s a petting zoo and a simple play area. As I often spend time at home rushing around, up there we decided to stay as long as we felt. I got plenty of movement pushing the little girl on the tire swing for over one hour (rather than telling her when I’d had enough, rushing to the next thing, for a change!).

After, as usual, a magical time in Innsbruck we took the train to Oberösterreich. There we stayed with my old housemate in her village of five houses…


We got to try beekeeping! Collected food from the fields for our meals. Saw an incredible circus on the bank of the Danube. Fed the neighbour’s friendly sheep.

One great thing about the whole trip was that many if my friends havechildren, so on the days we didn’t hike she was running wild with other kids. Often in the play parks she would meet new kids and play with them – with no common language! Just the language of play!

Thank you to everyone who made this visit possible!

On our last day we took the short train journey to Vienna (Austrian trains are brilliant – one had a Kinderkino – a little cinema for kids!) and came back home to Ireland refreshed after lots of fresh air and movement. Ready for the next adventure – starting big school!